Versailles/Paris. The BMW Group and the Witzigmann Academy welcomed the who’s who of international high-end gastronomy yesterday to the Palace of Versailles, outside of Paris. The two partners presented the international Eckart Witzigmann Award (ECKART) for outstanding services to the culinary arts, nutrition and responsible use of resources together for the sixth consecutive year. For the first time, the ECKART was endowed with €50,000 of prize money for each category, to reflect the prestige and importance of the award among top international culinary prizes.

Around 150 guests from the international gastronomy scene came to the Palace of Versailles yesterday to pay tribute to the winners of the ECKART 2017. The combined culinary expertise of more than 80 Michelin stars was gathered in the “Galerie des Batailles”. The evening was hosted by ECKART 2017 award-winner and three-star chef Alain Ducasse, who served guests a world-class gala dinner following the awards ceremony.

In the sixth year of collaboration, the ECKART reinvented itself once again to become even more international and more diverse. This was the first time the awards ceremony has been held outside Germany, as the ECKART embarks on a world tour to visit culinary experts around the globe.

For the first time this year, all four ECKART award categories were endowed with a cash prize of €50,000 each. The sum provided by the BMW Group will benefit a charitable cause or innovative project chosen by the award-winner.

The BMW Group will provide a further €50,000 to support a yet-to-be-named project by a recent ECKART award-winner that has continued to grow. The jury of the ECKART together with the BMW Group is responsible for selecting the project. In this way, the BMW Group can ensure that its commitment to ECKART contributes to long-term improvements.

“Social responsibility, sustainability and cultural and international diversity – that is what both the ECKART and the BMW Group stand for. We want our award-winners to be able to continue with sustainable projects,” said Dr. Nicolas Peter, member of the Board of Management of BMW AG, Finance, and patron of the ECKART 2017, in his speech. “But sustainability is about more than just paying attention to a topic one time. In recent years, we have got to know a number of fascinating award-winners and projects. Together with the jury of the Witzigmann Academy, we will select a project we feel is so important that we want to continue to support it.” 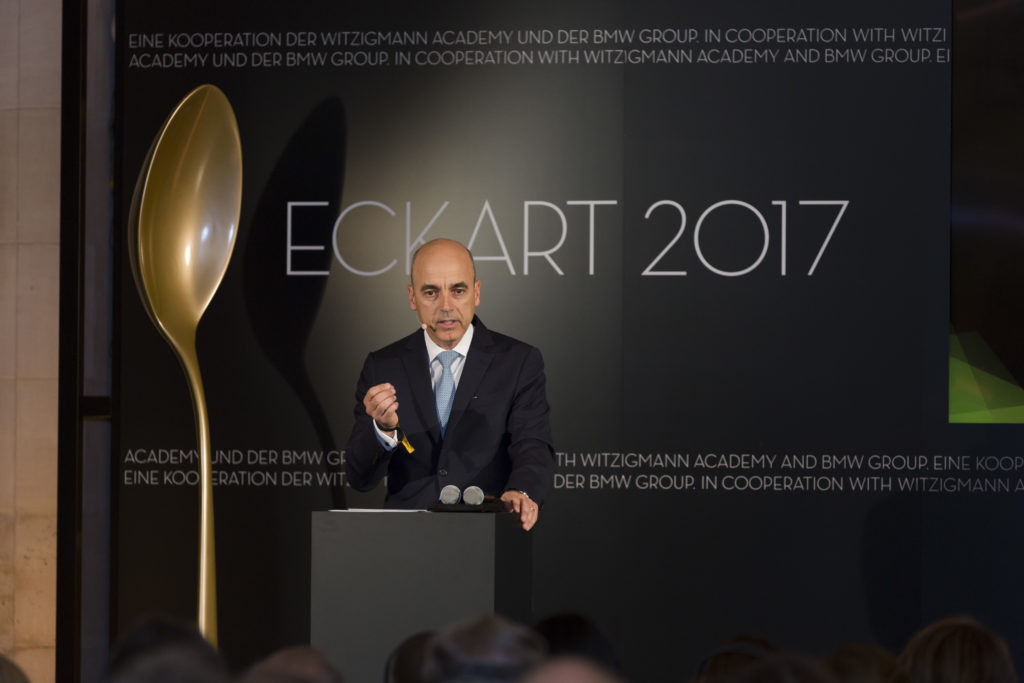 The BMW Group’s total endowment of €250,000 means that the international prestige and importance of the ECKART is now also reflected in the prize money. The ECKART is hereby positioning itself in the very top tier of international culinary awards.

Eckart Witzigmann expressed his thanks at the evening event: “Thanks to the BMW Group, the ECKART can get actively involved and make a real difference”. He continued: “My name stands behind this award and my greatest wish is to give an opportunity to projects that are trying to make the world a better place. Responsible behaviour in all aspects of nutrition is top priority for me.”

Alain Ducasse represents the revival of haute cuisine unlike any other and makes the product the focal point in a radical way. He is the first chef to create and serve an all-vegetarian menu worthy of three stars. Ducasse thinks far beyond the plate. Food is for him a fundamental need with the status of a civil liberty.

Alain Ducasse is the only chef to have earned the highest accolade of three Michelin stars for three different restaurants: “Le Louis XV” in Monte Carlo; “Le Plaza Athénée” in Paris and the “Alain Ducasse at the Essex House” in New York City.

An extraordinary career path from dishwasher to Michelin-starred chef and a manager with the courage to support her from the very beginning: Born in the Dominican Republic, María Marte is linked to Spain’s Luisa Orlando by a unique story. After immigrating to Spain in 2003, Marte took a job as a cleaner and dishwasher at El Club Allard, though her ambition from the outset was to become a chef. Overcoming hurdles and prejudices, she managed to earn herself a job as kitchen assistant. By 2006, she had become the right hand of chef Diego Guerrero, who was awarded the restaurant’s first Michelin star in 2007 and its second in 2011. However, in the wake of Guererro’s unexpected departure in 2013, managing director Orlando decided to take a bold and unprecedented step: Defying all doubts, she appointed the erstwhile dishwasher María Marte as head chef. Their success is a testimony to the credentials of both women: Together, they have successfully defended the two-Michelin star rating of El Club Allard since 2014. Marte is the only female from Latin America to hold two Michelin stars.

The name Guérard is synonymous with nouvelle cuisine. In 1974, Michel Guérard and his wife, Christine, opened the “Les Prés d’Eugénie” hotel and restaurant in the spa town of Eugénie-les-Bains. Many of the visitors to the spa were actively looking to lose weight, so Guérard began observing how and what they ate. He soon recognised that diet meals were optimised for their nutritional benefits, without any attention to pleasing the palate. Guérard therefore decided to combine his ideas for healthy cuisine with classic French dishes. His recipes focused not only on reducing calories, sugar and fat, but also on enjoyment.

Guérard set out his new way of cooking in his book, “La grande cuisine minceur” (English: Light gourmet cuisine), published in 1976: Today, it is considered the first description of nouvelle cuisine. By 1977, Guérard had earned three Michelin stars for the “Les Prés d’Eugénie”, which it has retained to this day.

In 2006, well-known marketing and music-video director Tiffany Persons travelled to Sierra Leone for the first time to film a documentary. Impressed by the enthusiasm and cheerfulness of local people facing the most adverse conditions, Persons founded Shine On Sierra Leone (SOSL) in 2007 to raise money for building urgently-needed schools. The organisation has continued to grow ever since: Today, the non-profit SOSL is committed to promoting wider access to education,

healthcare, microfinancing and regional culture, and providing sustainable building and agricultural programmes for the communities of Sierra Leone and its people.

Her success speaks for itself: The Muddy Lotus Primary School founded by SOSL, which was built using the revolutionary sustainable earthbag construction method, is one of the best in the country. More than 20,000 people across the country were also able to improve their future prospects by attending computer classes. In just five years, by focusing on microloans for women, the organisation has enabled more than 3,500 female small-business owners to earn their living. SOSL worked with the ecotourism company Tribe Wanted to build an ecovillage, using the CalEarth earthbag method and creating many new jobs. The aim is always to develop sustainable change from within society, instead of relying on outside intervention as an act of charity.

According to the motto new month new guest chef, w


Error: API requests are being delayed for this account. New posts will not be retrieved.